The Mother Back To Strong Down 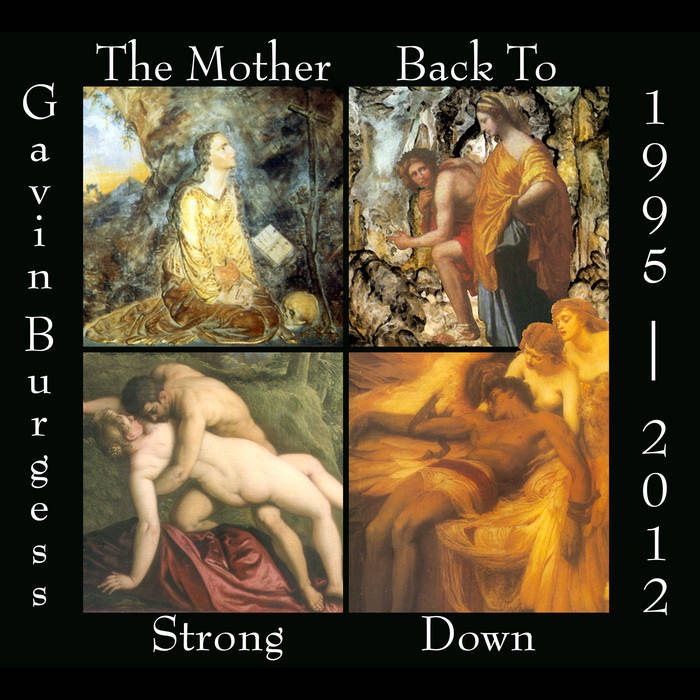 The Mother Back To Strong Down - Best Understood as Four EPs on one CD.

The Mother: Four tracks from the lost Forms Of Escape album. Originally intended as rough mixes, these are all that remained of these songs after a well intentioned computer technician "cleaned up" the hard drive on which the multitracks resided. With the exception of I Feel Good and Darker the live tracks included on this CD are also songs originally included on this album. A further three demos from this project accompanied Some Girls Wander By Mistake on the Sasquatch Sessions EP, an early version of another song, When Alice Dances, can be heard on 1999’s Muster compilation CD, and a Demo of Hero was released on the Demos 'n' Jams album. One other song, Prophet's Lament, remains unreleased in any form.

Back To: Some Girls Wander by Mistake from the Sasquatch Sessions EP and live tracks from Whangaehu Music Festival Feb 1997. We played two sets. An evening set at around midnight with a malfunctioning monitor system and an afternoon set the next day under the effects of severe sleep deprivation. It wasn't our best gig but it was filmed - on SVHS tape - with the audio taken directly from the camera’s built in microphones. In 2004 I took a copy of this audio to Neil Maddever who produced masters for a full length live CD. My plan was to release this as a companion CD to the Forms Of Escape album but subsequent events rendered this impossible. In '06 I found a better copy of the source audio. The four tracks included here are taken from this.

Strong: Three songs from an acoustic solo performance at Blue Note in 2002. The lead guitar on Ancient Love was added later at Sasquatch. Darker is a track from an already written but as yet unrealised album project of the same name. Those with keen ears will be able to discern the background conversation between myself and a very drunk member of the audience who was determined to join me on stage.

Down: Waiting was written in 2002 and performed live only once – with Andrew Vincen at The New Bodega that same year. In 2006 Andrew and I found ourselves once again living in the same town and took advantage of the opportunity to record the track. Arahi Hagger, who in 1996 was briefly a member of the G. B. Band, played drums and percussion. Down to Daisy was written in the mid nineties. In 2002 I arranged the song for string quartet and this was performed as part of a composition class run by Clive Cockburn and joins a long list of those performances to which I wish I had taken a recording device. The '60's pop' version included here is closer to the original concept and was recorded at Sasquatch in 2006. Nigel Bateman added the drums during a session in 2007. This was never performed live by the GB Band as when I first demo'd it to them our then bassist, Warwick Hill, said "You've got to be kidding" - and that was the end of that. In hindsight I think it's one of my better songs from that era - but there's no accounting for taste….. In 2011 The Gavin Burgess Band reformed, performed a couple of gigs, and recorded The Girl On Hospital Hill. I reworked the vocals for this and mixed the track early in 2012.